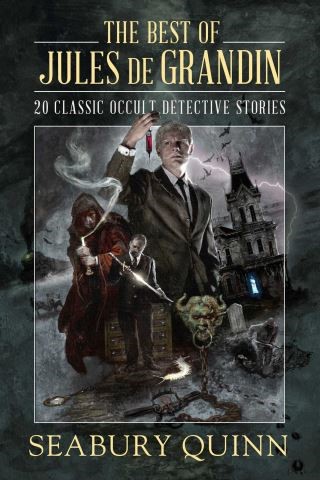 The Best of Jules de Grandin

A collection of the 20 greatest tales of Jules de Grandin, the supernatural detective made famous in the classic pulp magazine Weird Tales.
Today the names of H. P. Lovecraft, Robert E. Howard, August Derleth, and Clark Ashton Smith, all regular contributors to the pulp magazine Weird Tales during the first half of the twentieth century, are recognizable even to casual readers of the bizarre and fantastic. And yet despite being more popular than them all during the golden era of genre pulp fiction, there is another author whose name and work have fallen into obscurity: Seabury Quinn.

The Best of Jules de Grandin, edited by George Vanderburgh, presents twenty of the greatest published works featuring the supernatural detective. Presented in chronological order with stories from the 1920s through the 1940s, this collection contains the most incredible of Jules de Grandin's many awe-inspiring adventures.

Seabury Quinn: Seabury Quinn was a pulp magazine author whose popular stories of the occult detective Jules de Grandin were published in Weird Tales between 1925 and 1951. Quinn penned ninety-two short stories and one full-length novel featuring “the occult Hercule Poirot,” which were enormously popular with readers. Quinn died in 1969.