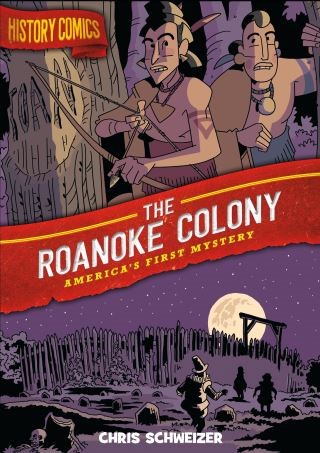 In History Comics: The Roanoke Colony, Chris Schweizer investigates one of America's oldest and most intriguing mysteries.

Over a hundred years before the pilgrims, the very first English settlers arrived on Roanoke Island. But without warning, these colonists abandoned their new home and disappeared without a trace.

What happened to the colonists? To figure it out, we’ll need to investigate how these missing settlers got to Roanoke in the first place, and what the people already living there thought about these strange foreigners. It’s a case filled with brutal battles, perilous pirate ships, ruthless queens, scheming businessmen, and enough skeletons to fill a graveyard.

With History Comics you can travel back in time to the launchpad at Cape Canaveral, the deserts of the American southwest, the riot at the Stonewall Inn, and beyond! In this new nonfiction graphic novel series from First Second, the past comes alive!

Chris Schweizer: Chris Schweizer is a cartoonist who lives in rural Kentucky with his wife and daughter. He is large and sometimes he has a bushy beard but sometimes he only has a bushy mustache. He makes comics every day and loves studying history and teaching people about it. Chris is also the author and illustrator of Maker Comics: Fix a Car! and The Princess of Red Hats.