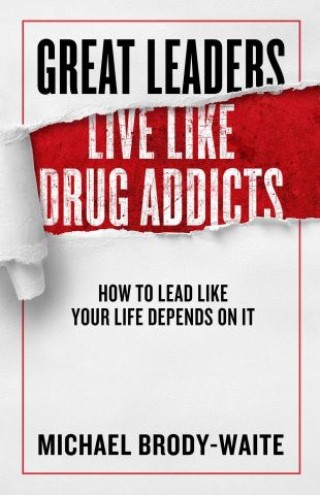 How to Lead Like Your Life Depends on It

What if you learned that to lead well, you’d need to live like a drug addict?

During treatment for drug addiction, Michael Brody-Waite learned three principles that became the difference between life and death:

Leaving rehab, Michael entered the workplace where he was shocked to see most business leaders doing what he had been taught would kill him. He began to see striking similarities between drug addiction and what he calls “mask addiction.” Leaders everywhere were hiding their authentic selves in order to get what they wanted. They were doing things like:

Instead of chasing drugs, leaders were chasing professional, financial, and social success from behind a mask—to the detriment of themselves and the people around them. Thanks to his recovery, Michael’s three principles gave him an unlikely competitive advantage throughout his career, resulting in a level of success unexpected for a “drug addict.”

In Great Leaders Live Like Drug Addicts, Michael explains what drug addicts do to recover and provides a step-by-step program you can use to break free from your mask addiction to thrive in both work and life. He equips you with the tools you need to live and lead mask-free—tools to enable you to stop following others, lead yourself, and become one of the dynamic, growing, authentic leaders this world desperately needs.

Michael Brody-Waite: At the age of twenty-three, Michael Brody-Waite was a full-blown drug addict. Every day he drank a fifth of vodka and a twelve-pack of beer, he smoked two packs of cigarettes and more weed than any human should, and he did whatever other drugs he could get his hands on. He had been kicked out of college, fired from his job, and evicted from his apartment. He had no money and no home, was throwing up blood, and believed he would be dead before his thirtieth birthday.

Then, on September 1, 2002, after running out of options and fearing death, he checked into rehab, entered recovery, and has been transforming himself every day since.

Michael’s TEDx Nashville YouTube video “Great Leaders Do What Drug Addicts Do” is the number one talk in the history of TEDx Nashville. It has been seen by over one million people in over twenty-five countries and provides insight into his seventeen-year journey from addiction and near homelessness to successful entrepreneurship. This talk sparked the #MaskFreeMovement and brought awareness to Michael’s Mask-Free Program, built on three principles inspired by his recovery, showing leaders how to achieve balance, reclaimenergy, and thrive in work and life.

In 2010, Michael left a Fortune 50 company at the height of the recession to cofound and lead InQuicker, a healthcare SaaS company that allowed patients to self-schedule appointments online. Under his leadership, the organization grew to 20,000 percent revenue growth in less than six years. This exceptional growth landed InQuicker a spot on the Inc. 500 list of Fastest Growing Private Companies. Additionally, the organization was named one of the “Best Places to Work” four times and recognized as Healthcare Company of the Year. In 2015, InQuicker was sold to a publicly traded company. After selling his company, Michael served for three years as the CEO of the Nashville Entrepreneur Center, a 501c3 that helps over 2,000 entrepreneurs every year start or grow a business.

Michael is an acclaimed speaker, Inc. 500 entrepreneur, award-winning, three-time CEO, a leadership coach, and an author. His accomplishments include being named Most Admired CEO, named to the Top 40 Under 40, and being recognized by the Nashville Chamber of Commerce as Healthcare Entrepreneur of the Year.

Today Michael is on a mission to teach individuals, organizations, and communities how to lead themselves by living mask-free. In his personal time, he is focused on being the best husband, father, and recovering addict he can be. For more information, please visit www.MichaelBrodyWaite.com to learn how the Mask-Free Program can help you or your organization thrive.