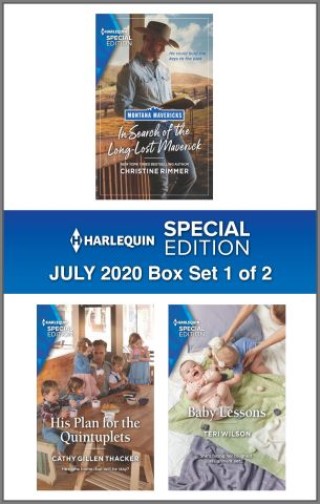 IN SEARCH OF THE LONG-LOST MAVERICK
Montana Mavericks: What Happened to Beatrix?
by Christine Rimmer
Melanie Driscoll has come to Bronco seeking only a fresh start; what she finds instead is Gabe Abernathy. The blond, blue-eyed cowboy is temptation enough. The secrets he could be guarding are a whole nother level of irresistible. Peeling the covers back on both might be too much for sweet Mel to handle…

HIS PLAN FOR THE QUINTUPLETS
Lockharts Lost & Found
by Cathy Gillen Thacker
When Gabe Lockhart learns his friend Susannah Alexander wants to carry her late sister’s frozen embryos, he can’t find a way to support her. And his next Physicians Without Borders mission is waiting… But five years later, Gabe comes home to Texas to find Susannah is a single parent—of toddler quintuplets! Can he stay in one place long enough to fall for this big family?

BABY LESSONS
Lovestruck, Vermont
by Teri Wilson
Big-city journalist Madison Jules’s only hope for an authentic parenting column rests with firefighter Jack Cole and his twin baby girls. But the babies unexpectedly tug on her heartstrings…as does their sexy dad. When opportunity knocks, Madison is unsure if she still loves the draw of the big city until she learns Jack isn’t who she thought he was…

Christine Rimmer: A New York Times bestselling author, Christine Rimmer has written over ninety contemporary romances for Harlequin Books. Christine has won the Romantic Times BOOKreviews Reviewers Choice Award and has been nominated six times for the RITA Award. She lives in Oregon with her family. Visit Christine at http://www.christinerimmer.com.Cathy Gillen Thacker is a popular Harlequin author of over one hundred novels.  Married and a mother of three, she and her husband resided in Texas for eighteen years, and now make their home in North Carolina.  Her mysteries, romantic comedies, and family stories have made numerous appearances on bestseller lists, but her best reward is knowing one of her books made someone's day a little brighter.

Teri Wilson is the Publishers Weekly bestselling author of the Hallmark Channel movies UNLEASHING MR. DARCY, MARRYING MR. DARCY, THE ART OF US and NORTHERN LIGHTS OF CHRISTMAS, based on her book SLEIGH BELL SWEETHEARTS. She  also won the prestigious RITA Award for excellence in romantic fiction. Teri has a major weakness for cute animals, pretty dresses and Audrey Hepburn films, and she loves following the British royal family. Visit her at teriwilson.net.