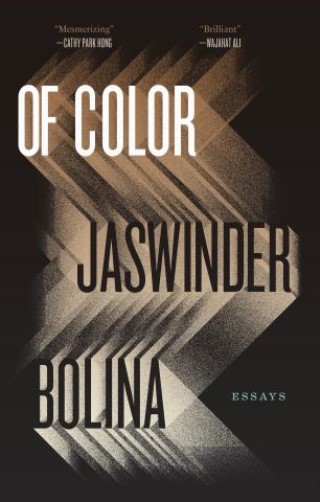 In his debut essay collection, award-winning poet Jaswinder Bolina meditates on “how race,” as he puts it, “becomes metaphysical”: the cumulative toll of the microaggressions and macro-pressures lurking in the academic market, on the literary circuit, in the dating pool, and on the sidewalks of any given U.S. city. Training a keenly thoughtful lens on questions that are never fully abstract—about immigration and assimilation and class, about the political utility of art, about what it means to belong to a language and a nation that brand you as other—OF COLOR is a bold, expansive, and finally optimistic diagnosis of present-day America.

Jaswinder Bolina is an American poet and essayist. His new book of poems The 44th of July was published by Omnidawn Publishing in April 2019. His previous collections include Phantom Camera (winner of the 2012 Green Rose Prize in Poetry from New Issues Press), Carrier Wave (winner of the 2006 Colorado Prize for Poetry from the Center for Literary Publishing at Colorado State University), and the digital chapbook The Tallest Building in America (Floating Wolf Quarterly 2014). An international edition of Phantom Camera is available from Hachette India. His poems have appeared in numerous literary journals and been included in The Best American Poetry series.

His essays can be found at The Poetry Foundation, McSweeney’s, Himal Southasian, The Writer, and other magazines. They have also appeared in anthologies including the 14th edition of The Norton Reader (W.W. Norton & Company 2016), Language: A Reader for Writers (Oxford University Press 2013), and Poets on Teaching (University of Iowa Press 2011).

He teaches on the faculty of the M.F.A. Program in Creative Writing at the University of Miami.